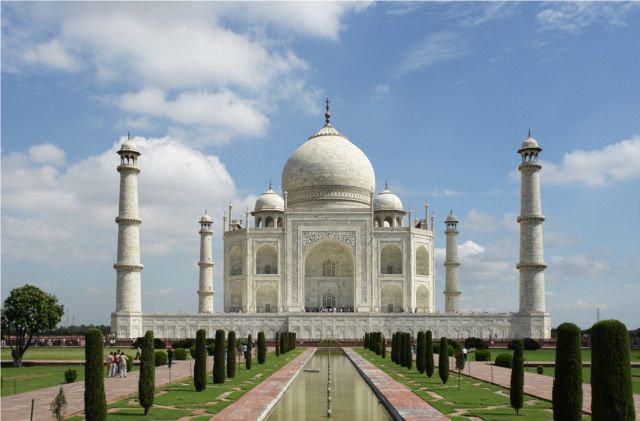 If you’re looking for an unusual luxury destination to celebrate your wedding anniversary, then why not consider one of the following.

The Taj Mahal, the beautiful white marble mausoleum began construction in 1631 and took an astonishing 22 years to completion, is located in Agra, Uttar Pradesh, India. It was built by Mughal emperor Shah Jahan in memory of his third wife, Mumtaz Mahal (meaning jewel of the palace), who sadly died in childbirth. Shah Jahan was placed next to his Mumtaz, upon his death, where they rest for eternity.

For your very own “Out of Africa” experience visit Botswana, home to the largest number of elephants in the world, where the big cats roam free, amongst many other creatures and watch the incredible wildlife on your very own tailored safari.  Discover the Okavango Delta home to one of the world’s largest inland river deltas, its unceasing web of water that never makes it to the sea, instead soaking into the central salt pans of Botswana.

The Great Barrier Reef is one of the seven wonders of the natural world, take a helicopter ride and view it from a different angle and you can understand why. It is larger than the Great Wall of China and the only living thing on earth visible from space. This gem of a natural beauty has become a much desired destination and has over one hundred islands certain to make a treasured memory when celebrating your anniversary and redefine your idea of paradise.

The Maldives, called the tropical paradise, with unrivalled luxury, stunning whiter than white powder sand and luminous cyan-blue water of the Indian Ocean, must make this the perfect anniversary destination. Where you can snorkel in the warm waters and discover the exotic marine life in its beautiful clear lagoons.

Autumn in New England, has become famous for its glorious foliage when billions of leaves turn from green to a kaleidoscope of colours, and the air is crisp and clean. Perfect for romantic hiking or driving holidays. This breath taking natural spectacle starts in the northern regions around the beginning of September and continues down to the southern regions through to the end of November.

These are just five examples of luxury romantic destinations to celebrate your wedding anniversary. Or course there are many other stunning locations around the world that would make an ideal wedding anniversary break, but hopefully these have fired your imagination.