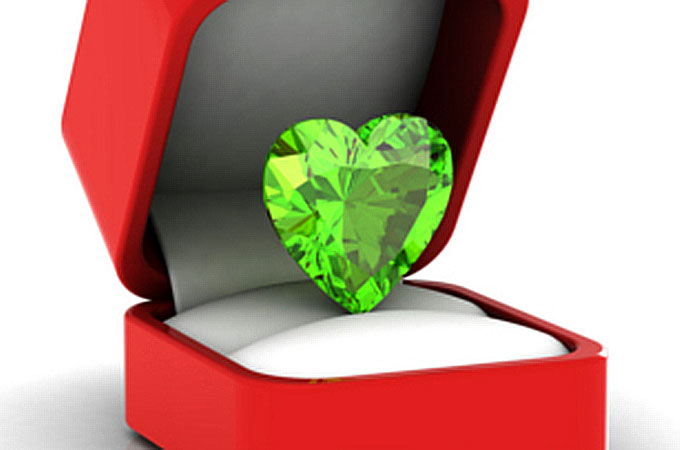 Below is a list of both traditional and modern gift materials, as well as classic flower and gemstone symbols, which mark a couple’s 66th wedding anniversary in countries around the world…

This year, as you celebrate your 66th wedding anniversary, you will most likely be so in tune with your spouse that it almost feels like you are telepathically linked.

After 66 years living together, through thick and thin, you may also wonder what all the fuss is about. Nevertheless, only very special couples manage such a successfully long marriage. So it’s time for celebrations – even if only on a modest scale.

In the absence of traditional symbols associated with this milestone event, you are free to consider any gemstone or precious metal if you are planning to buy gifts of jewellery this year.

Unusual gemstones make stunningly unique jewellery, so how about the sphene, which draws incoming light and transforms it into a rainbow of colours? In this way, sphene is similar to a diamond, but with a natural green or yellow-green colour. Widely considered to be one of the finest and rarest gemstones, sphene is soft and unsuitable for rings, but it can be made into exquisite pendants or cufflinks.

Bouquets of flowers always make a wonderful gift. There are no symbolic flowers or colours associated with the 66th wedding anniversary, but you could ask your florist to create a bouquet of 66 flowers encompassing all the colours of the rainbow. Now that is certain to bring an appreciative smile to the faces of your special couple.

If travel is your traditional anniversary treat, this could be the year to organise a family trip along the historic Route 66, taking in such legendary attractions as the Cadillac Ranch, a public art landmark in Amarillo (Texas). Unquestionably, this would be a novel family holiday and an exceptional gift guaranteed to create wonderful new memories for the wedding anniversary photo album.

If that sounds a little too adventurous, you can always celebrate quietly at home with a bottle of Champagne, a favourite take-away and a night curled up on the sofa watching a classic road trip movie.

Here are six of our favourites…